Teflon high temperature tape is made of high-quality glass fiber cloth, coated with PTFE resin on the surface, and coated with organic pressure-sensitive silica gel on one side to make high-quality Teflon high-temperature resistant tape.In order to avoid this phenomenon, it is necessary to operate correctly and import raw materials in production.

But glue residue phenomenon is a common phenomenon.

After the Teflon tape is subjected to high temperature, there will be residual glue, glue overflow, degumming and other phenomena. Through close observation, it will be found that there are tiny residues, which have a great impact on production.If the temperature is too high and it is not within the scope of the process requirements, there will also be residual glue phenomenon, and you should check whether the temperature sensor is normal; however, the Teflon high temperature tape product itself has quality problems, and the pressure is not strictly followed in the coating production process. The baking data of the sensitive adhesive is heated and cured, and the curing time is not enough or the coating line speed is too fast, which will cause the glue, the primer glue, and the substrate to be unable to combine the components;When the Teflon tape is formed, the semi-finished roll material needs to stand for 2-3 days before the tape can be re-rolled, and then cut and used, mainly to fully combine the glue and the substrate, so that the glue can be in a natural state Fully cured, if the rewind tape is slit without complete curing, residual adhesive will appear.

If there is residual glue phenomena in the production process, the problematic workpiece should be taken out and placed separately. In order to avoid such phenomenon, the online products should be checked more intensively, and analyzed through a period of time or a certain number of bad statistics. The percentage of residual glue rate should also be checked according to the actual situation of this batch of tapes to find out the root cause of the problem, so that similar phenomena will not occur in the production process. 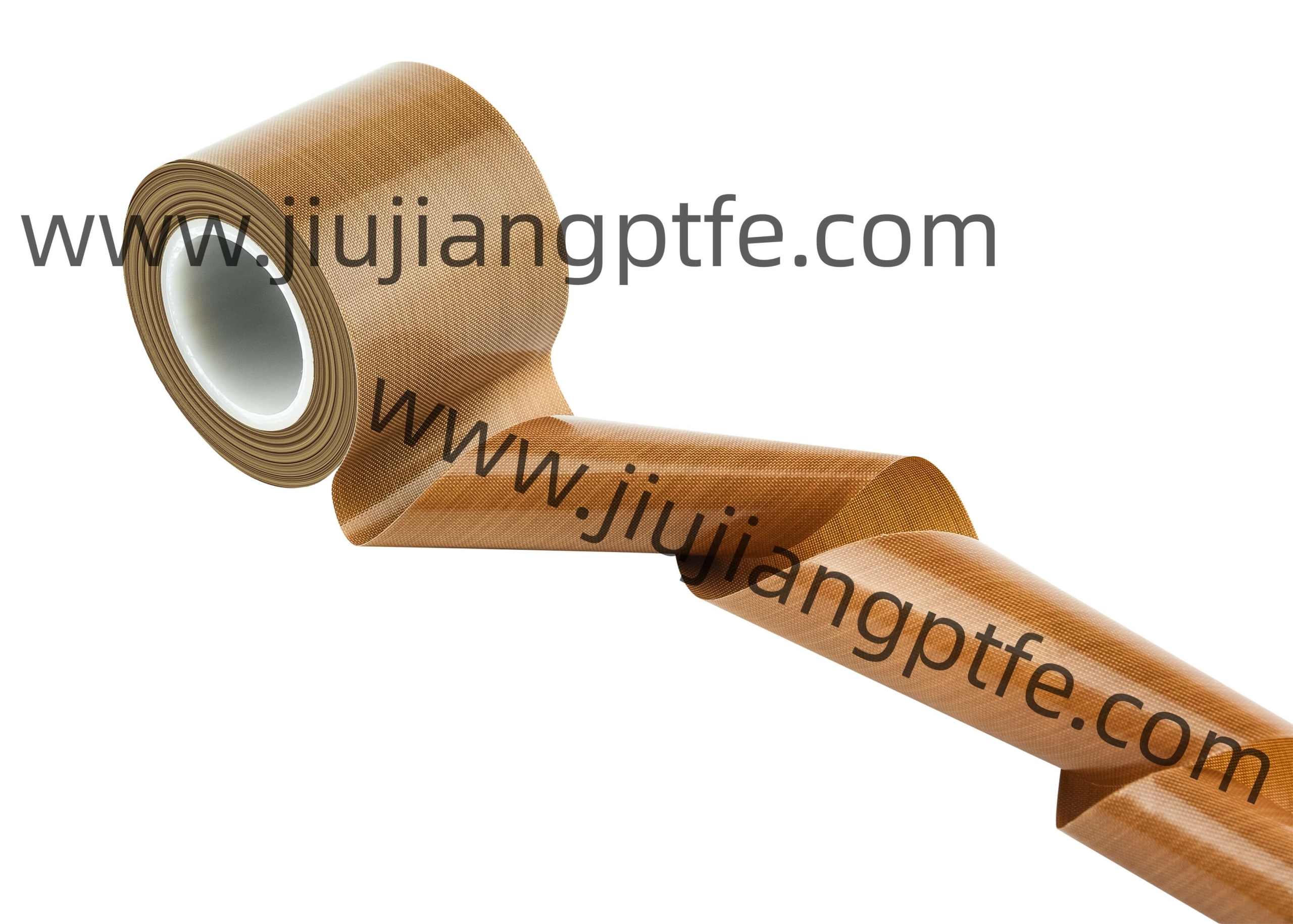 Therefore, the production process of Teflon tape should also be strictly carried out. Once a problem occurs, it will cause waste of resources and delay production.

It can be seen that the phenomenon of residual glue in Teflon tape is very common. The reason may be the problem of raw materials, or it may be a problem in production. In addition, it may be that the temperature is too high during use, which exceeds the high temperature Teflon tape can withstand.

If there is a problem with the quality of the tape, the customer should not panic and contact the manufacturer to solve this problem.

Different clients have different requirements, we can provide different grades of Teflon cloth, for example:

2.Standard grade: made by imported materials, not only having good corrosion resistance and heat resistance, the surface is smooth, and non sticky, it also can be used in general industrial fields.

Reasons that affect the strength of Teflon coated fiberglass fabric

In the selection of raw materials, we must buy qualified glass fiber cloth.

If abnormal production equipment or improper operation by personnel causes the high temperature to last too long, it may affect the hardness and strength of the glass fiber cloth, and the strength of the produced Teflon coated fiberglass fabric will be unqualified.

The temperature change adjustment and time control of the drying process are very important.

Preparation method of PTFE modified film suitable for solar cell protective film, adding surfactant, epoxy resin and polytetrafluoroethylene resin powder to kerosene in sequence to obtain a mixture; stirring the mixture at constant temperature to obtain the second mixture; Then sequentially matured, formed, heat treated, cold treated, sliced, modified. The formed PTFE modified film suitable for solar cell protective film has a light transmittance of more than 90% at 400nm to 750nm, which can fully meet the performance requirements of photovoltaic vehicles for the film before packaging. It has a long service life and is resistant to friction and wear, which aso has excellent mechanical properties.

In the context of global warming and the deterioration of the ecological environment, looking for alternatives to fossil energy and improving the energy structure have become the focus of attention of all countries. Among the many clean energy alternatives, solar energy is considered to be one of the most promising energy sources in the future for its clean, safe, and abundant resources, and it has received great attention and support from countries all over the world.

At present, the most representative of the development and utilization of solar energy is the solar cell, which is a self-produced and environmentally friendly clean energy source. It generates negatively charged electrons and positively charged holes correspondingly through the sensitivity of semiconductor materials to incident light. Then, due to the potential difference or charge concentration difference, the electrons move to the negative electrode and the holes move to the positive electrode, and then generate electricity. Generally speaking, solar cells are placed outside, the outer wall or roof of the object is directly exposed to sunlight to maximize its efficiency. Since solar cells are exposed to the external environment for a long time, strict requirements are put forward as a protective film for protecting solar cell modules, such as low linear expansion coefficient, excellent air tightness, high light transmittance, and excellent surface smoothness resistance and excellent heat resistance and chemical resistance.

Traditional solar cell protective films such as glass substrates are easily broken due to their low shock resistance, high density and heavy weight, and are not suitable for use as protective films for solar cells in photovoltaic vehicles. The main use of ethylene tetrafluoroethylene copolymer (ETFE) , due to the high molecular polymer has vinyl, its chemical activity is relatively high, and its weather resistance and scratch resistance are relatively poor.

A composite film for the backplane of solar photovoltaic cell modules and its preparation method is widely used in the industry. It is composed of seven layers of materials. Among them, the polytetrafluoroethylene film is subjected to low-temperature plasma surface treatment to generate hydrophilicity on the upper and lower surfaces of the film. Therefore, the tackiness of the surface of the PTFE film is greatly enhanced, which makes it have good bonding performance with the PET film layer, and also enables the backplane composite film to be more stably fixed to the solar photovoltaic cell film, improve the overall stability of solar photovoltaic cells.

The above research provides a cheaper and easily available material for solar cell protective film-polytetrafluoroethylene, but the processing method for PTFE film is only applicable to the back sheet composite film, because the back sheet does not need sunlight, so the transparency is not The high PTFE film can meet the needs of the back sheet film, but it is not suitable for the front film of the solar cell. The reason is that the solar cell uses the sunlight to generate electricity, and the intensity and amount of the incident light directly affects the solar energy. The performance of the battery, the PTFE film used in the above scheme is poor in light transmission, its sunlight is less, and the solar energy conversion utilization rate is too low.

Polytetrafluoroethylene is used as the raw material for preparing solar cell protective film. Polytetrafluoroethylene (PTFE) is a white wax-like linear crystalline thermoplastic. Since the fluorine atom linked by each carbon atom in the molecular structure is completely symmetrical in conformation, there is no hydrophilic group and photosensitive group in the molecule, and its moisture resistance and weather resistance are good. The bond energy of the CF bond is high and stable, and the fluorine atom is more stable than hydrogen. The van der Waals radius of the fluorine atom is larger than that of the hydrogen atom, so the complete substitution of the fluorine atom makes the PTFE form a spiral structure. The inert spiral-shaped perfluorinated “cylindrical shell” combined with the non-polar and crystalline structure of the polymer, PTFE has excellent chemical resistance, most non-fluorinated strong acids, strong bases, strong oxidants and salts have no effect on them .

Using kerosene as the solvent of the second mixture is conducive to the optimal arrangement of polytetrafluoroethylene molecules and improving the film-forming effect. Using epoxy resin as the bisphenol epoxy resin is conducive to the curing of the film after film formation. And after the raw materials are evenly mixed, the slow stirring is carried out again, during which there is a transformation of cold and hot states, which promotes the optimization of the molecular chain structure. The transparent front film made of polytetrafluoroethylene as the main material obtained by curing, isostatic molding, high temperature heat treatment, low temperature heat treatment and other modification methods has good light transmittance, and the light transmittance can reach 400nm to 750nm reaches more than 90%, it can fully meet the performance requirements of photovoltaic vehicles for the front film of the packaging, with long service life, resistance to friction and wear and scratches, and excellent mechanical properties.

By adopting a specific temperature program method, it is more helpful to improve the setting performance of the molecular structure and improve the molecular structure. Plasma is used to modify the slices, and its effect is to increase the surface activity of the slices to enhance their bonding strength and achieve strong adhesion between the PTFE film and the photovoltaic cell.

Pls Contact us infocorefrp@gmail.com to learn more about PTFE materials.

Teflon conveyor belt is a new type of composite material made of glass fiber cloth coated with Teflon resin and processed by mechanical processing. Teflon conveyor belts are divided into two categories with mesh and no mesh. The specific model is generally defined according to the size of the mesh and the thickness of the conveyor belt.

Any more questions? Feel free to write us a mail!